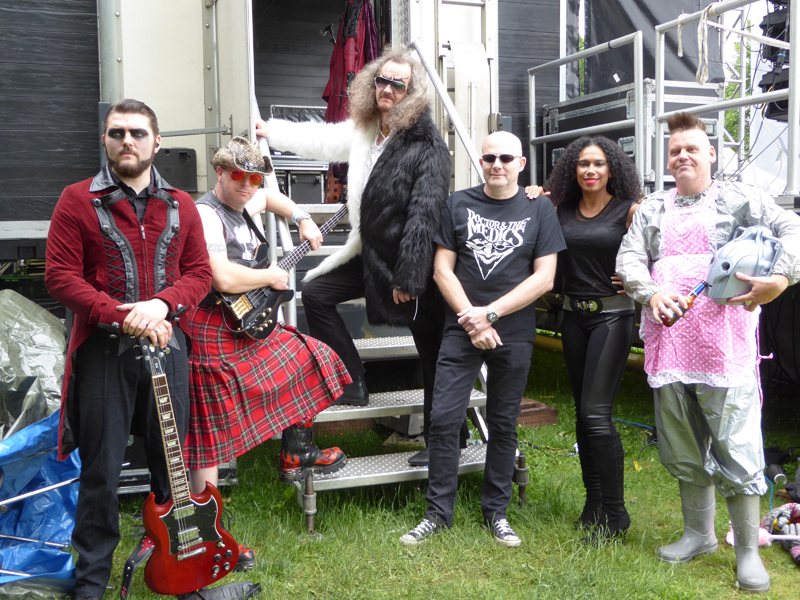 Dr and the Medics were created in 1982 at the dawn of the 80’s by The Rev Dr Clive Thomas Jackson. He was DJing at the time at his phenomenally successful soho nightclub “Alice in Wonderland,” under the name of “The Doctor”. The band were only formed to win a £5 bet and do one show, they used the first name that came into their heads, hence “Dr and the Medics!”

One gig to led to another and they soon discovered that their unique blend of Psychedelia, Glam and Punk Rock was finding an ever increasing audience. So much so that by 1985 The NME named them as “THE live band of the year.” 1985 also saw them top the then highly respected Indie Charts, with their “Happy but Twisted” E.P.

The band’s next chart success saw them top the charts in the UK and 28 other countries with “Spirit in The Sky”, their signature tune and the song that they are best known for the World over. Often seen as One Hit Wonders the band did get to number 22 with their next single “Burn”, however The Dr still likes to wear his “One Hit Wonder” badge with pride, making them the only One Hit Wonder to have had 2 hits!

The band continued to tour extensively for the following decade with their reputation for great live shows guaranteeing that they were always popular on the live circuit throughout the World. By the late 90’s, fashion changes, line-up changes, management changes, label changes…  (in fact, virtually everything changed apart from The Dr’s flared trousers!)  mean that the band were almost extinct by the end of that decade. However, in 1999 The Doctor decided to do one final tour and put together a new line up just for these dates.

This meant that any plans of retirement were to be thwarted as yet again the band found themselves with one tour leading to another. The new revitalised line up and show was greeted with acclaim by audiences across the board, from festivals and events to venues both at home and abroad. Their current set consists of much loved 80’s covers (All given the unique Medic’s treatment) and Medics originals from both the past and present.

The band adapt their set for their shows to suit all audiences. So, whether it be a rock venue or 80’s gathering they always deliver a set that delights the crowd.

Such is the power of their performance that they produced the shock result of the 2005 TV show “Hit Me Baby One More Time,” when they won the studio vote for best act against Jackie Graham, Belinda Carlisle and ………..SHAKIN STEVENS!!!

In 2008 The Doctor was acknowledged by his hometown Liverpool, when he was invited to perform for “The Number One Project” to 11,000 people in the 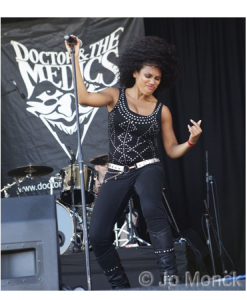 Echo Arena alongside Atomic Kitten, The lightening Seeds, The Christians, The Scaffold, The Farm, Gerry & the Pacemakers and many more Liverpool chart topping acts. The band also recorded Frankie Goes to Hollywood’s “Two Tribes” as part of the venture.

At the start of 2020 the band were looking at their busiest schedule for almost 30 years ….….. What could possibly go wrong? The Pandemic swept away all their work in 2020 but the Doctor and his band still refused to lie down. Instead, the Doctor got busy writing a two man show, “The Doctor Will See You Now – Life as a One Hit Wonder” which has been taken up by theatres across the UK and will be out on the road in 2021 and 2022.

The band have also been able to push ahead with their album and are aiming to see it released in 2021. “The Delicious Rise and Fall of Hari Oakham” is being produced by the band’s guitarist Dan Angelow and has already seen two tracks used in a film.

2021 is going to be a very interesting year for Dr and the Medics and we look forward to entertaining you soon!
Hari Oakham (Spiritual Advisor and Press Officer)