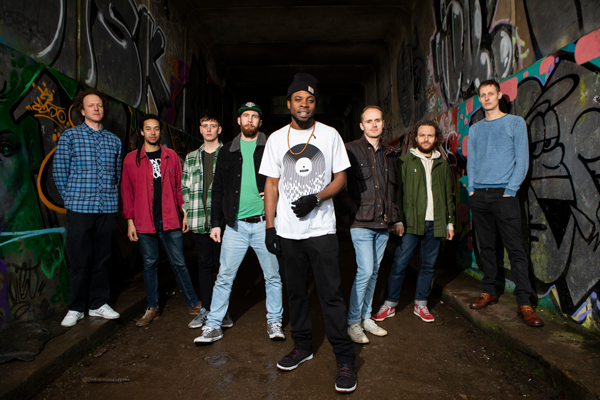 “They’re excellent proof that the best music exists between and beyond genre boundaries and national borders and are reputed as being one of the finest live bands in Wales.” – BBC Horizons

Afro Cluster is a Cardiff-born collective inspired by the legacy of West-African funk/Afrobeat and golden age Hip-Hop.

The creative ethos behind their work is to instigate love and hope in an increasingly hostile world. Across their catalogue you will hear strong rhythms and jazzy refrains emboldened by motivational lyrics penned and delivered by emcee Skunkadelic.

They’ve been well received on the road at prime festival slots in the UK including Glastonbury, WOMAD, Green Man, Boomtown and Wilderness. They’ve also picked up support shows with the likes of Gilles Peterson, Hot 8 Brass, People Under The Stairs and Ibibio Sound Machine.

The band’s debut album ‘The Reach’ dropped in February 2021, exploring the quandary of human nature, our relationships, our struggles, and the current state of the music industry, with a focus on how a positive mindset and unity can help us find solutions.